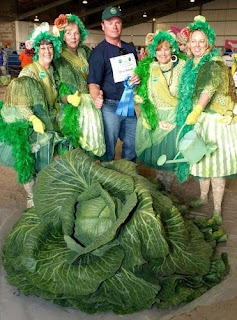 At a fair where cabbage is king, Steve Hubacek is the undisputed king of them all. Steve Hubacek broke his own world record Friday when his enormous cabbage "The Beast" weighed in at 127 pounds at the Alaska State Fair's annual Giant Cabbage Weigh-Off.

That's more than a pound heavier than another world-record-breaking cabbage Steve Hubacek also grew this summer. He entered the smaller one in the "green cabbage" category Wednesday in the fair's general crop exhibits contest, where it weighed in at 125.9 pounds. That green behemoth broke a 20-year-old record set by a cabbage grower from Wales in the United Kingdom. State fair officials said that prior to the 1989 mark, the cabbage record had stood for more than a century.


Hubacek, who lives south of Wasilla, said he had hardly taken time to appreciate crashing the international record Wednesday before he immediately turned his attention to readying "The Beast" for its fair journey.

Before Friday's weigh-off began, several fair-goers posed with the cruciferous giant. While Hubacek kept an eye on his contender, he discussed his passion for growing big cabbage, a 14-year hobby. He wouldn't give up any growing secrets or reveal the variety of seed he uses. But he said he had nearly given up hope that his secret cabbage seed would ever produce a world-record holder.

"I was getting ready to throw that seed out and start with something else," he said. 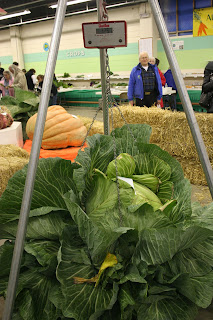 But with an apparently ideal mix of long, sunny days and rainy nights, his crop -- fenced in to keep munching moose away -- took off. During Alaska's short growing season, cabbage will pack on several pounds each day.

In the livestock barn at the fair, "The Beast" looked wilted. Hubacek worried a little. The longer it sat, the more water evaporated from its leaves.

"The Beast" lacked the enormous round head most giants carry -- Hubacek estimated its diameter at only 16 inches, while his other record-breaker was 24 inches across. Built like a linebacker, this cabbage was tall, dense and packed with smaller cabbages tucked in amid its leaves. Called "pups" by some cabbage growers, the smaller heads are common among the giants.

It took seven young men to carry it to the weigh-off scale. Hubacek whooped and jumped in the air when the weight was announced.

For his growing talent, Hubacek took home $2,000, plus the $6 first-place ribbon from Wednesday's win.

Hubacek said "The Beast" will ultimately become compost, tilled under to feed another year's cabbage plants. He grows smaller cabbage elsewhere in his garden for eating, he said.
The big ones "get woody; then they're not as good to eat," he said.