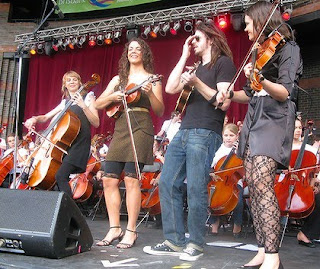 More than 850 artists contributed to the 150-hour recording session which began Monday at 6am (AEST) in Newstead, on Brisbane's CBD eastern fringe, and ended at midday today at the Riverstage in the Botanic Gardens.

The record attempt, which is yet to be verified by Guinness World Records, was organised by Queensland University of Technology's (QUT) professor of music Andy Arthurs.

”We have to work it out with Guinness yet,” Professor Arthurs said.
”he correspondence with them was it had to be verified and that it had to be over 24 hours.
”It's the longest continuous recording for multiple artists which they say is a new category, but it had to be 24 hours long at least.

”We reckon about 600 musicians have come through playing for the session and there's 250 on stage backing Deep Blue which I haven't counted.”

Numerous activities were being held on Sunday on six stages situated in or around Southbank and the Botanic Gardens.
Swimming sensation Stephanie Rice was one of the sports stars to do a meet-and-greet with the public on the Sports Central stage hosted by the cast of Channel Nine's afternoon show The Shak.

A number of multicultural acts were being staged in the Gardens of Origin and Celebrity debate on whether the northside or the southside of the Brisbane River was the better place to live.

It resulted in a tie.

Former Go Betweens and The Rip Tides member John Wilsteed and Ed Kuepper, who co-founded The Saints, took part in the record jam session. Prof Arthurs said they took a number of precautions to ensure there were no breaks in the jam.

The artists also continued to play on Sunday morning when they were transported by Cadillac from Newstead to the Botanic Gardens with the entire “road trip” recorded on camera and on digital audio.

They also had a house band on standby, the entire time, for back-up.

”We had a house band to mop up when things went wrong so that whatever happened we kept going,” Prof Arthurs said.
”It's recorded digitally on audio with two back-ups going.”