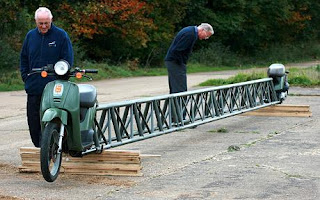 Colin Furze, 29, spent two months creating the incredible 46ft motorbike, which can travel at speeds of up to 30mph.
He used two 50cc Honda Sky mopeds which he extended using pieces of aluminium.

"You can ride it like a normal motorbike but steering is a bit of a problem as it has just a small turning circle," said Mr Furze, from Stamford, Lincs.

"It is quite heavy and difficult to handle and it would be hard to ride on the roads as you need about six widths of road to turn."

He constructed the massive motorcycle in his back garden to celebrate his 29th birthday, using his existing moped and buying another identical one from eBay which he took apart.

The final motorbike measures 14.03 metres and beats the previous record of 9.6 metres.

To make it into the record books, Mr Furze, who also holds the record for the world's largest bonfire in 2007, had to drive the bike 100 metres which he did on an airfield.

He posted a film of him riding it in YouTube and sent the video along with signed statements, including one from a solicitor, to Guinness.

"I thought it would be a cool thing to do and I'm thrilled to be in the Guinness Book of Records," he said.

"I loved BMX bikes when I was a boy and then became interested in motorbikes and I thought it would be fun to break a world record.

"My mum Beryl was quite interested at first in what I was doing but by the time it was finished, she was glad to see the back of it."

He is now building an even longer motorbike, which he hopes will be almost double the length.
at 5:42:00 PM